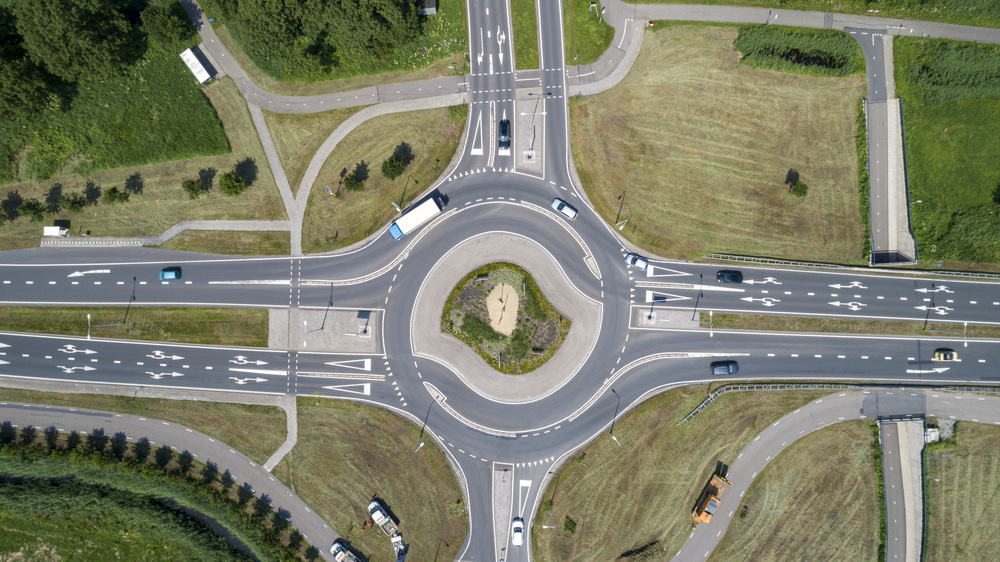 If you’ve ever driven into a circular intersection and felt as if you were lost in a revolving door – you are not alone. Even experienced drivers tend to find themselves confused when approaching a roundabout intersection in the road. Civil engineers understand that people will be thrown off by a poorly designed system and can essentially feel trapped when confronted by other vehicles in the circle. The results of this confusion can range from travel delays to serious injuries, and engineers are continually trying to solve this issue.

A key problem with large circular intersections has been that some require the vehicles moving through the circle to yield to the vehicles trying to enter the circle, which only creates more congestion within the driving lanes. To help resolve these difficulties, engineers have utilized a relatively new development in traffic engineering known as a roundabout. A modern roundabout generally features a smaller footprint than traditional traffic circles had in the past. In larger traditional circular intersections, vehicles tend to drive at higher speeds and often change lanes, making maneuvering within them more challenging.

Roundabouts are measured according to the overall distance across the circle from outer edge to outer edge of the driving lanes. The inner diameter of roundabouts can measure between 45 and 300 feet. The “desirable maximum entry design speed” on these roundabouts ranges from 15 to 30 mph, depending on the size of the circle. Signage, rumble strips, flashing lights, and other visual cues are used to alert drivers of the upcoming intersection and reduce their speed.

Modern roundabouts feature designs that help direct and control the flow of incoming traffic, including: configurations that deflect traffic around the central island of the roundabout, flared entrance points that provide wider entry lanes to add capacity and accommodate large vehicles, raised or painted areas called islands that separate the entering and exiting traffic and provide safe spaces for pedestrians to cross.

The geometry of the impending roads and the roundabout itself are also critical to the safe operation of this modern type of intersection. The angle of entry into the roundabout should be close to 90 degrees to slow down incoming traffic. If the angle is similar to that of a freeway entrance ramp, the vehicles tend to approach at high speeds, often leading to collisions.

The issue of what to put or not put in the roundabout’s central island is debated among traffic engineers. The central island is often raised above the grade of the road and can feature either landscaping or other man-made objects. Such visual obstructions can force the drivers to focus on the road in front of them instead of looking across the roundabout at other vehicles. It can be especially useful to block the view across the central island at night, when the headlights of vehicles approaching the roundabout might give drivers on the opposite side of the circular intersection the false notion that the road continues straight. On the other hand, some engineers contend that central islands should not have fixed objects because, evidently, drivers have had very serious collisions with these objects.

According to the Insurance Institute for Highway Safety, it is becoming more common that traditional intersections (with a stop sign or traffic light) get changed to a roundabout. The IIHS found that crash rates at those intersections tend to fall after such conversions. The IIHS reports a 72 to 80 percent decline in vehicular crashes that cause injuries and a 35 to 47 percent reduction in all crashes. While engineers are often tasked with deriving creative solutions to problems, there is no roundabout solution to driver safety.