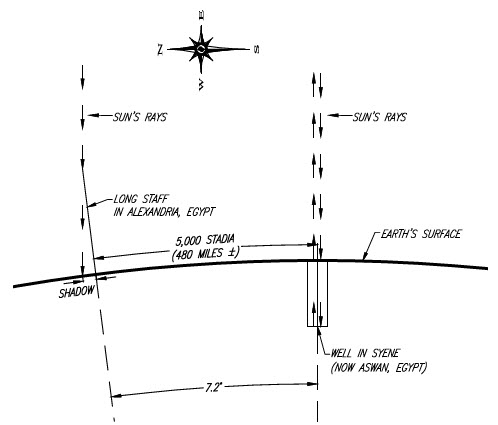 We’ve just hit that point on the calendar when most people celebrate the “official start of summer”. Tuesday, June 21, was the summer solstice, the longest day of the year. Many of us use these long days to get a round of golf in after work, tend to our gardens, or go for a late-day run. Being the “survey geek” that I am, I am always reminded of an event that took place on the summer solstice about 2300 years ago (no, I wasn’t alive to witness it).

The year was about 240 B.C. and a young scholar, Eratosthenes, from Shahhat, Libya, who had studied mathematics at the Lyceum in Athens, Greece, had come up with an idea on how to calculate the circumference of the Earth. He had heard that there was a well in the town of Syene (now Aswan, Egypt) that every year, at noon, on the summer solstice, reflected the sun’s rays directly up. This meant that the sun was directly overhead.

Armed with this information, Eratosthenes devised a plan to determine the circumference of the Earth based on the following factors:

Accounts vary as to how Eratosthenes was able to measure the distance between Syene and Alexandria.  Some sources state that he used a camel caravan.  Apparently, camels walk at a fairly steady pace, and distances between cities were measured by how long it took camels to walk between them.  Other sources state that camels were not precise enough for Eratosthenes, so he hired professional surveyors (The 2nd oldest profession in the world) who were trained to walk with equal length steps.  In the end, Eratosthenes determined that Alexandria was about 5,000 stadia (480 miles) from Syene.

Eventually, Eratosthenes determined that the angle between the 2 radial lines was about 7.2 degrees (or 1/50 of a complete circle).  This meant that the circumference of the Earth was about 250,000 stadia, or 24,000 miles.  We know today that the circumference of the Earth is actually 24,900 miles along the equator.  That’s some pretty remarkable results for someone who didn’t have a pocket calculator!

Fun Fact:  Christopher Columbus, before setting sail to cross the Atlantic Ocean, knew about Eratosthenes’s value for the circumference of the Earth.  However, he chose to accept the value of another mathematician, Ptolemy, who calculated the circumference to be 18,000 miles.  Needless to say, Columbus was woefully undersupplied for the real journey to China & India.  Had he not bumped into the North American continent, he would surely have perished.

Here we are now, 530 years after Columbus’ discovery of the “New World”, and we can choose to spend these long summer evenings however we desire.  I think I’ll pass the time tonight on my front porch with a cold beer.  CHEERS!