This is the sound of a land development project being burned by a section of the ordinance that lacks common sense or could use some remediation.  If you’ve worked in this industry long enough you have experienced one of these first-hand.  I think it’s time to analyze some of the currently adopted ordinance regulations and shed light on the absurd, unrealistic and/or out-dated text of the Zoning Code.

Every time I come across one of these nuisance regulations I think to myself, “Why is this in here and who comes up with this stuff?”.  It’s possible that they made sense at one point in time but advances in technology and/or construction techniques have made them irrelevant and unnecessary, or maybe they were devised out of spite.   Who knows; but either way, they can be really annoying and ruin the developmental potential of a parcel, and even worse, take away from developmental creativity. 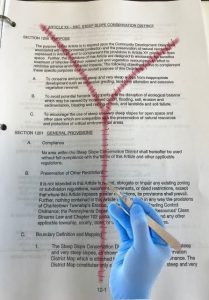 The first item I would like to examine is steep slopes.  This is a subject that I’ve written about before and is probably the one that bothers me most.  “Generally speaking”, steep slopes are defined as areas that exceed 15% grade.  They are usually broken down into two categories, precautionary & prohibited, and in most municipalities, they come with a lot of restrictions.  How each municipality defines steep slopes is what’s so problematic.

What qualifies as a steep slope?  In some ordinances, to qualify as a steep slope, the area in question must exist over at least 3 consecutive two-foot contours (or 6 vertical feet), or they need to cover an area of at least 500 square feet, and/or extend at least 50 feet horizontally.   Other ordinances will make exclusions for man-made slopes.  Meanwhile, other municipalities consider “any” area that can be calculated as steep slopes to be governed and restricted no matter how small and even if man-made.

The frustrating part about using “any” area of steep slopes, no matter how isolated or small an area, is that these areas are usually anomalies in the TIN generation.  “What is TIN generation?” you ask.  The person writing that code should have asked that question.  Historically, surveyors would go out to a site and shoot in 50’ foot gridded pattern and along certain break lines in the terrain.  They would then interpolate the contours based on the triangulation of these points.  That’s one ground shot/250 sq.ft. of an area.   This means that an area of steep slopes, 500 sq.ft. in size (+-), may be depicted due to the lack of ground data when it doesn’t even exist.  Same goes for an isolated area of non-slopes in a sea of steep slopes.

If steep slopes truly are unanimously thought of as a valued and protected environmental resource in Chester County, all the municipalities should consider creating and adopting one standardized definition and regulation for steep slopes.