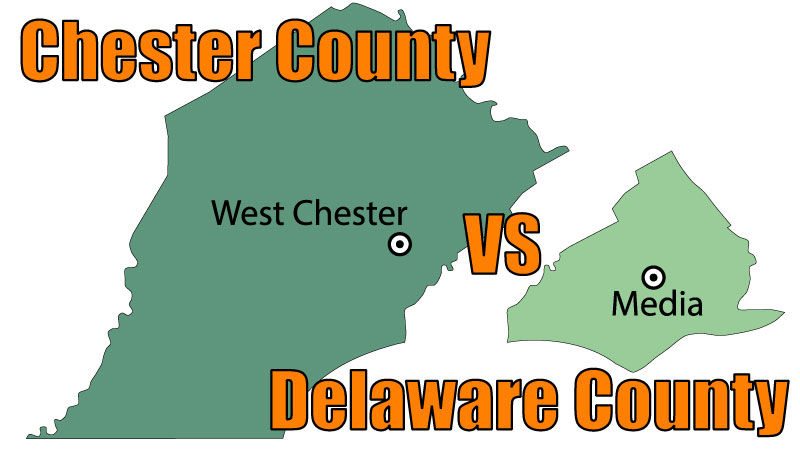 DELCOVIEWS
Delaware County sits just West of Philadelphia, with Chester County right next door. Even though Delaware County is directly next to Chester County, they are different in a lot of ways. If you take a drive from Center City Philadelphia to West Chester, you will notice that the landscape gradually changes as you get farther away from the city. Land use becomes less intense, there is more open space and all the infrastructure seems to have been built more recently than if you were to be heading the opposite direction. One could even argue that stormwater drains more efficiently. 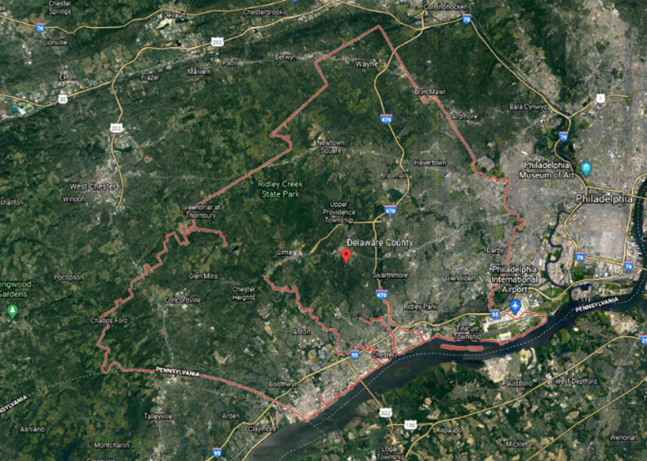 Delaware County encompasses approximately 49 Municipalities, which consist of 21 Townships, 27 Boroughs, and 1 City. The county is bordered by the Delaware River/Gloucester County (New Jersey) to the Southeast, Philadelphia County to the Northeast, Montgomery County to the North, and Chester County to the West. Some of the Municipalities that are contained within the county are Chadds Ford Township, Media Borough, and Upper Darby Township, to name a few. Delaware County is 191 Square Miles in size, has a population of 565,000, and a median household income of $72,000. There are nine major watersheds, with six of them being classified as WWF (Warm Water Fishes) streams, two classified as TSF (Trout Stocking Fishery), and one classified as HQ (High Quality), which is Ridley Creek. 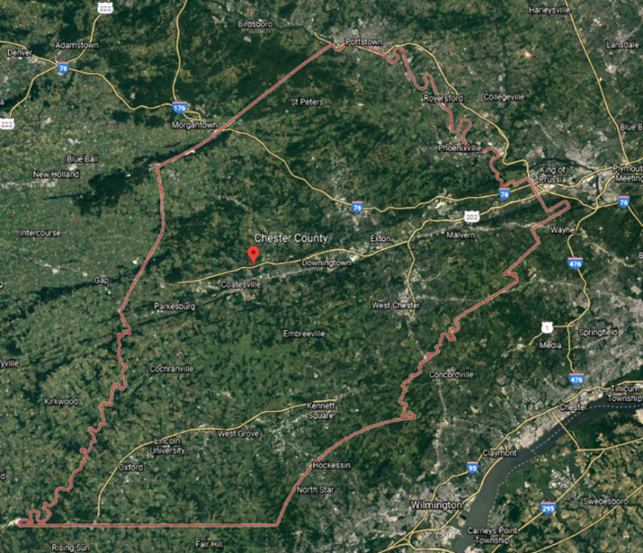 Chester County encompasses approximately 73 Municipalities, which consist of 57 Townships, 15 Boroughs, and 1 City. The county is bordered by Berks County to the North, Montgomery County the Northeast, Delaware County to the East, New Castle County (Delaware) to the South, Cecil County (Maryland) to the Southwest, and Lancaster County to the West. Some of the Municipalities that are contained within the county are Willistown Township, West Chester Borough, and the City of Coatesville. Chester County is 759 Square Miles in size, has a population of 525,000, and a median household income of $99,000. There are twenty-three major watersheds, with ten of them classified as WWF (Warm Water Fishes) streams, two classified as CWF (Cold Water Fishes), one classified as TSF (Trout Stocking Fishery), eight classified as HQ (High Quality), and two classified as EV (Exceptional Value), which are French Creek and Valley Creek. 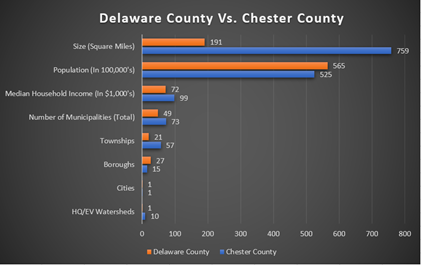 One thing I have found interesting is that there are fewer civil engineering firms in Delaware County than Chester County. There are a couple of small firms here and there, but most of them are municipal engineers that review plans. My thoughts on this are that since Delaware County is closer to the City, it has been developed more heavily over time, ultimately meaning that there is less land to build on, and therefore less engineering design work is occurring in that area.
Why do you think that there are more High Quality/Exceptional Value streams located in Chester County? I think it is probably due to a variety of factors – with the rural character and size of Chester County being two of them, but due to Delaware County being closer to Philadelphia, a large part of it was developed before construction really started to take off in Chester County. When these areas in Delaware County were developed, the municipal regulations were probably less strict. Now that the municipalities have had time to catch up, their ordinances have grown over time, and their standards have become more specific in regards to stormwater management, impervious coverages and the like, which have been put in place to protect water quality.

In its simplest form, engineering is development, whether it be manufacturing a car with high fuel efficiency, building a bridge, or constructing a commercial building. Since there is less open space to build on in Delaware County, there isn’t as high of a demand for civil engineering services compared to Chester County, which is more so on the fringe of the urban sprawl.

You can tie this thought process into the median household incomes listed above for the two counties, as Chester County is at $99,000, with Delaware County coming in significantly lower at $72,000. I believe that because there is more work to be done on the fringe of the urban sprawl, Chester County has become an epicenter of Southeastern Pennsylvania’s economy and that is why there is a higher median household income there.
Now, I am not saying that there isn’t a need to maintain the infrastructure in Delaware County, or there isn’t a need for other types of engineers to keep our wastewater plants, etc. up and running, but I think that in general, my statements do hold some weight in the civil engineering industry, and I’m sure in other industries as well based on how busy West Chester Pike is every morning.