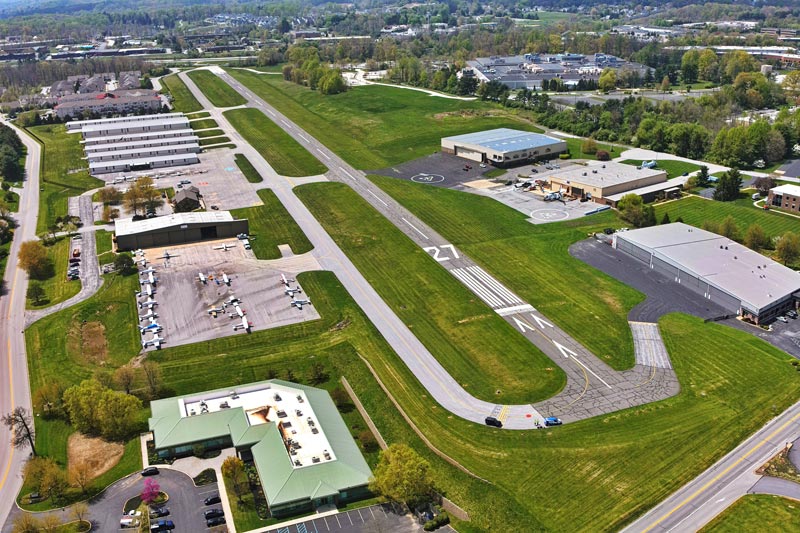 The Brandywine Airport contacted Howell Kline Surveying to get an up-to-date impervious coverage plan. In order to provide them with this plan, FAA Part 107 Pilots Paul Yost and Joe Keehn had to do some preliminary planning to get the job done.

Typically flight planning is simple. Most areas are not restricted for commercial drone flights, but this flight was over an airport, so a special FAA waiver was requested and approved before scheduling the flight with the airport.

The Day of the Drone Flight. 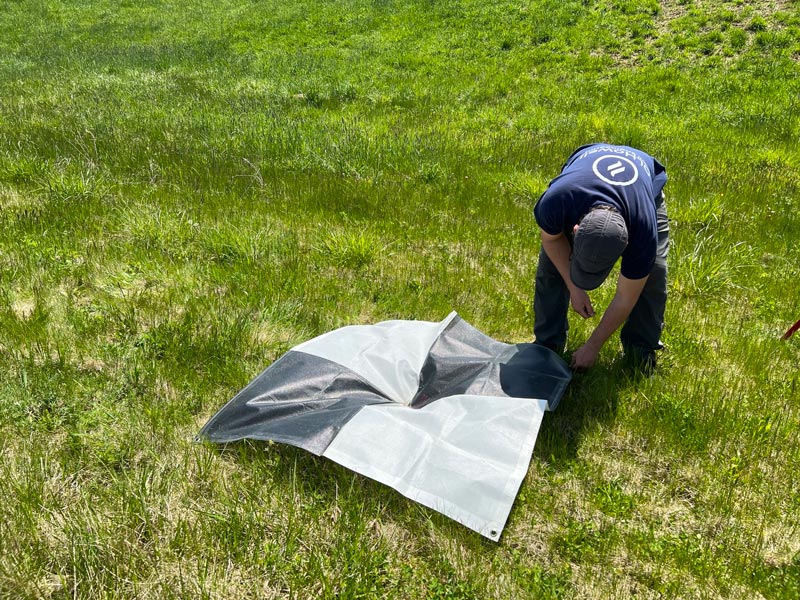 Drone Pilot Joe Keehn is shown placing the ground control at different locations around the airport. 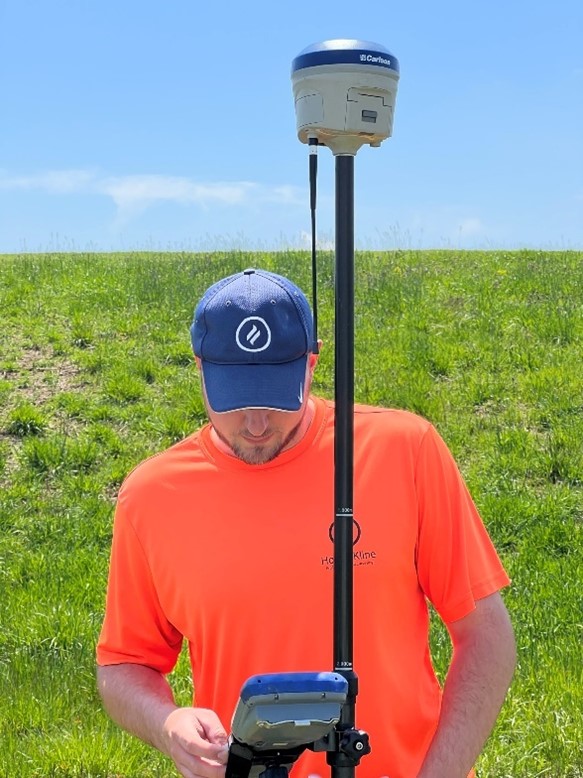 Drone Pilot Paul Yost is shown setting up the GPS station on the ground control points so that the points can be synchronized with the orthomosaic image during processing.

Once ground control points are set and GPS is set up, it’s time for the flight to begin. 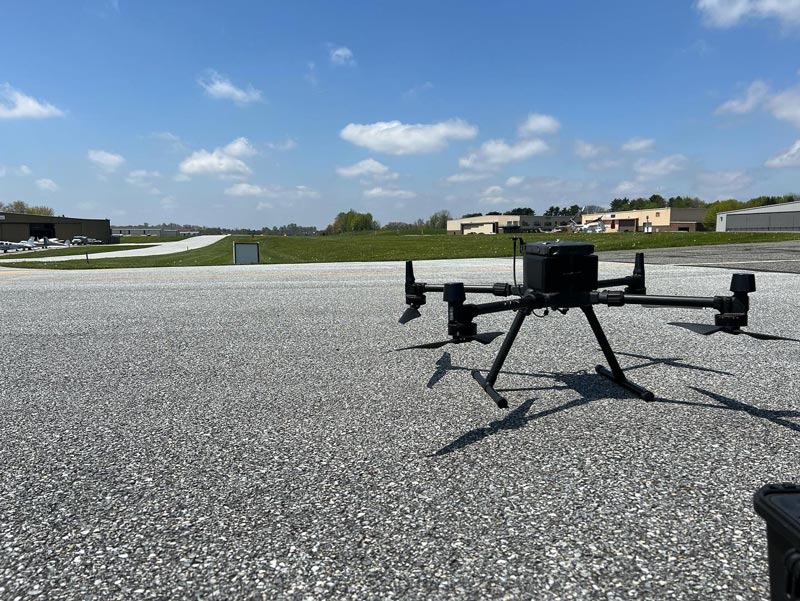 Since the flight covered such a large area, a visual observer was also required. Paul Yost of Howell Kline Surveying took that position at the other end of the runway. Paul (visual observer) and Joe (the Pilot in Command) remained in constant communication throughout the entire flight.

Paul Yost of Howell Kline Surveying kept a sharp eye out for the drone during the flight.

Once the flight was complete, the images were processed back at the office to produce a high-quality orthographic image that can be used for impervious coverage calculations. 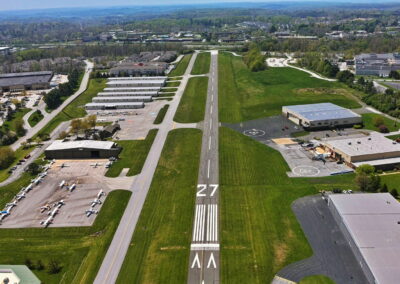 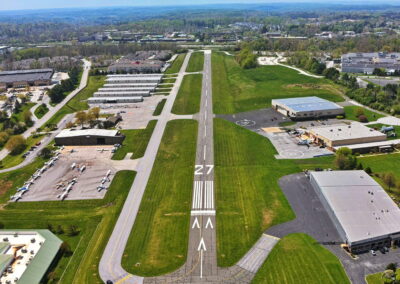 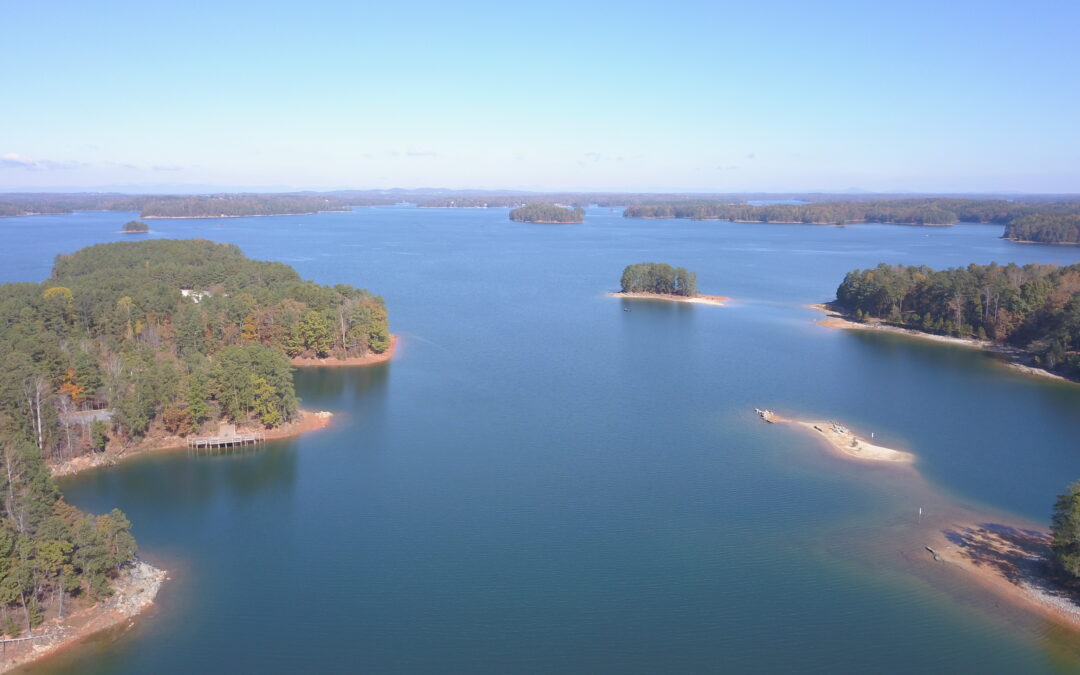 On this spooky Friday, the 13th, let’s travel to Northern Georgia, to the Army Corps’ manmade 38,000-acre reservoir, Lake Lanier. Designed for flood control, water supply, and to provide hydroelectric power, Lake Lanier was made by building the 1,630-foot-long Buford Dam on the Chattahoochee River. Construction began in the mid-1950s and by the time it was complete, areas of farmland, residences, and entire towns were covered by the ‘flood.’ These areas were abandoned of course, but not without using eminent domain to buy the land.

The reservoir is a major water supply source (states are even fighting over it), provides a significant amount of hydroelectric power to the Atlanta region, and is used to prevent downstream flooding during heavy rain events. But it has also become a popular recreational spot for boating, fishing, swimming, camping, you name it.

This big engineering feat was done nearly 70 years ago before they could use AutoCAD to perfectly scale and dimension site features or get accurate GPS coordinates and elevations by flying a DJI Matrice 300 Drone.

Now onto the spooky stuff. I mentioned they flooded entire towns to make this lake. This included cemeteries that had some unclaimed, unmarked graves that may or may not have been left behind. Many visitors claimed to have felt arms or legs when reaching into the murky water and others have even felt something pull them down. Over 500 people have died at the lake since its inception, including the ‘Lady of the Lake’ who was driving with a friend when she lost control of her car and disappeared over a bridge. Many people have claimed to see her wandering along the bridge at night like she was lost. It took 32 years before her car was discovered with her bones inside.

Despite its haunted history, well over 10 million people visit it each year—some for its beautiful scenery, others for the ghostly sightings. Next time you’re down south enjoying fresh water from the tap and not being flooded out, thank the engineers who made it happen… and the Lady of the Lake who may be there in spirit.

4RC – “The sight distance triangle shall be shown” for a new driveway… at the end of a cul-de-sac. 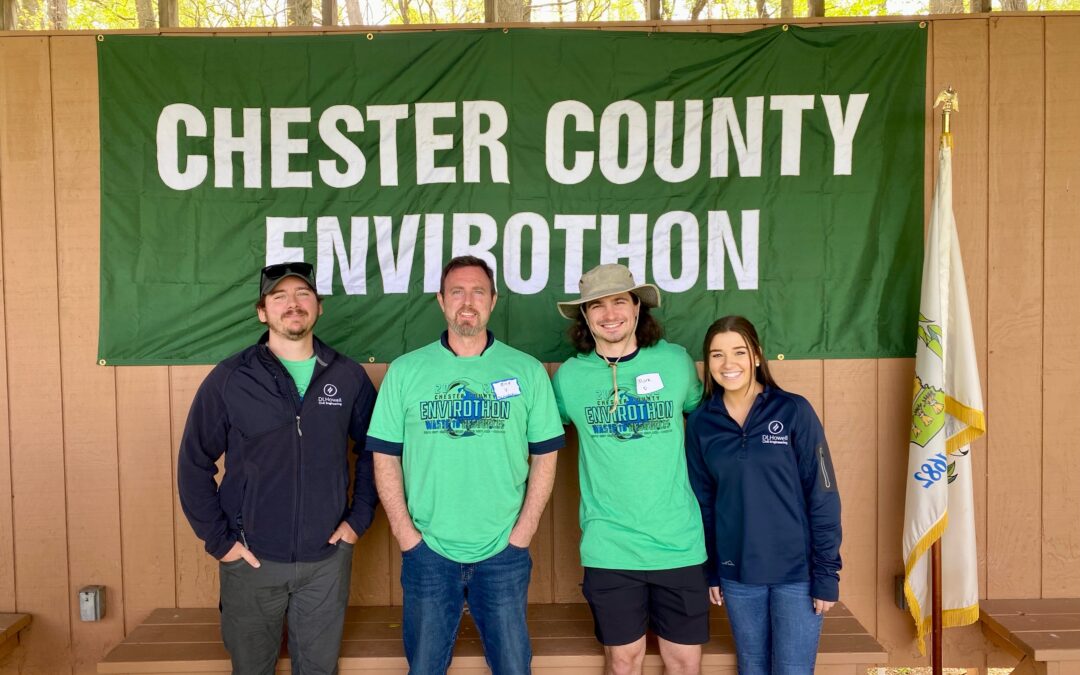 Each year at Hibernia Park, the Chester County Conservation District sponsors an event called the Chester County Envirothon. Students from elementary school to high school come together from all across Chester County to conclude a year of environmental education and discovery with team-oriented competitions.

Groups of 5 from each school compete against one another in various knowledge-based challenges – each with a different environmental topic. Teams put their knowledge to the test in aquatics, forestry, wildlife, soils, and current environmental issues. The groups spend 30 minutes at each station answering questions about the topic while also performing some hands-on activities. The team with the best score in a particular category received a prize, and the team with the best overall score for all categories was crowned Envirothon champion! The winner of the Chester County Envirothon for high school students moves on to compete in the Pennsylvania Envirothon.

Joining the students and supervisors every year are also volunteers from DL Howell. This week I got the opportunity to attend my first Envirothon along with three other members of the DL Howell squad – shoutout to Rebecca Reagin, Rich Vishneski, and Joe Keehn! Prior to this year’s event, I had never been to the Envirothon or knew much about it, so I wasn’t sure exactly what to expect. The sponsors and the rest of the volunteers did a fantastic job setting up comprehensive tasks for the students. They proved eager to find the correct answers, and I found myself surprised at how much the kids knew. When I was in middle school dirt was dirt and trees were trees, but these middle schoolers could classify different trees and soil types and even identify bird species by sound. It was encouraging to see young minds excited about the environment. With what I saw this week, I’m willing to bet there were some future engineers in those groups.

4RC – Resident (who lives in the woods and had trees cleared for her house to be built) said at a meeting “My only friends in life are the trees and I hope it makes you happy to know that you are cutting down my friends and killing them….”. Denny responded, “But your friends are trespassing on my client’s property…..”. 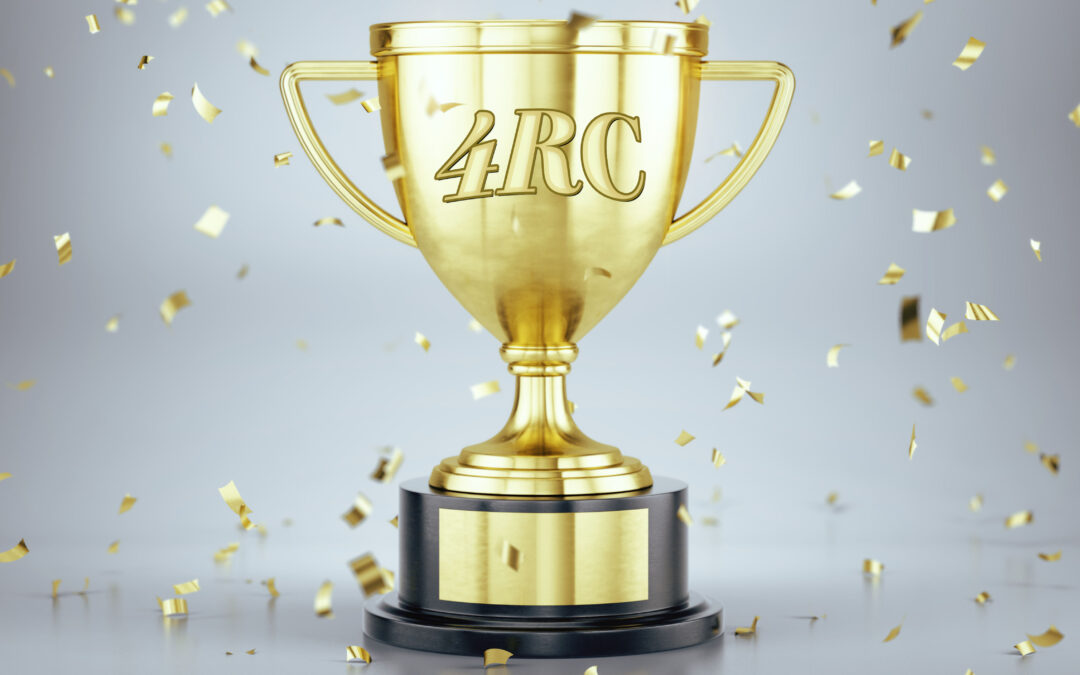 Stand Up and Be Recognized

One of my pet peeves, and I have about 10,000 of them, is reading a review letter and seeing a review comment that I know damn well was not written by the individual who signed the letter. You see, in my business, more often than not, you get the pleasure of having your plans reviewed by a person who is not only not a licensed engineer but often an individual who does not even have a degree in engineering. We can debate the legality of that forever, but in my mind, it is far from what I would say meets the “standard of care” and simultaneously can be infuriating. And if it isn’t coming from the engineering side, it is coming from meeting attendees who are usually neighbors. This would be fine if it were respectful, constructive, intelligent criticism or concerns, but 95% of the time, it is just a rude, condescending, disrespectful word salad. But such is life, and although complaining about things I cannot change is one of my favorite past times, I have decided to go in a new direction as part of the daily therapy I need from blowing a gasket. Rather than get upset and argue (which I absolutely love to do), I feel it appropriate to give recognition to these comments. After all, everyone deserves their 15 minutes of fame. And so… I give you my new add-on to our weekly newsletter. I have called it….4RC, which stands for the Ridiculous Regulator/Resident Review Comment of the week. Over the course of 23 years of being in business, we have collected quite the list of flat-out awesome comments we get to hear, but so few get to enjoy.

While most of you are home in the evenings watching Jeopardy, relaxing, enjoying your family or pets, we engineers are out presenting our plans to Townships. Rarely are we met with open arms and a big sloppy kiss. Usually, we are greeted with disgust, skepticism, and a general disdain for our existence from neighbors, etc. Ironically, this doesn’t bring me down. It actually energizes me as I view this as a life-size game that I am playing that I am addicted to winning for my clients. Did I say addicted to winning? Yes, I did. Arguing with me is kind of like wrestling with a pig; you both get dirty, but the pig actually enjoys it. And yes, in that example, I am the pig. It is weird, but I actually enjoy knowing I am bringing more traffic, stormwater and school-age children to your neighborhood, and I/we will never give up. We are engineers, we solve problems! This is why I have a line below my email signature that says… I don’t stop when I am tired, I stop when I am done! Honestly, if you cannot find humor in this business and learn to embrace the relentless barrage to obstruct you then you will go crazy. I am beyond ½ way there, trust me. So… keep an eye out for the weekly comment at the bottom of our newsletter. They are all real comments from real people. We, of course, will keep them anonymous, but that should not detract from the fun. Enjoy…. 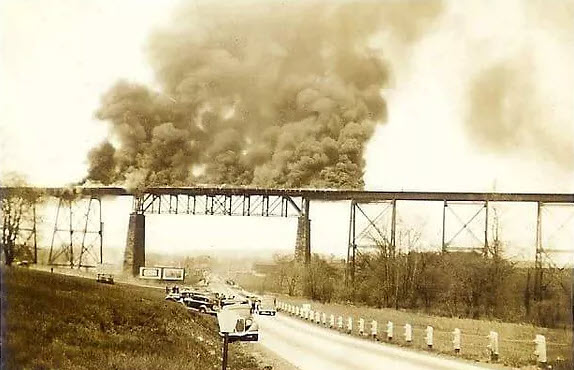 Nostalgia with a New Coat of Paint

I moved to Baltimore in the fall of 2012 for nine years. I have since moved back to Chester County, and I often find myself asking people what happened to “this restaurant” or “that store.” Downingtown, in my opinion, has always had a unique charm, but it has undergone a good bit of revitalization in the last decade. From the “Mickey Rooney” Tabas Hotel made into a senior living facility to the old paper mill turned into a restaurant, hoagie shop, and condo, and finally, the old Downingtown Fire House converted into East Branch Brewery Company. I think the idea of retrofitting is great. It keeps a few old memories blended with a fresh aesthetic and new use.

So that brings me to one of the biggest monuments of Downingtown, the Trestle Bridge. It is sort of a gateway into Downingtown via route 322 from West Chester. It has quite a history (see the link below for more info on the bridge). Trains stopped running there in the late 80s, and slowly it has fallen apart to the point that they put a “diaper” on it. This net suspended from the bridge is meant to catch falling debris and rocks. I would like to see a makeover for this architectural giant wonder. I heard years ago about the rails-to-trails project and thought it was an ingenious idea (see the link below for more info on rails-to-trails). The Chester Valley trail runs from King of Prussia to Exton. I think it would be progressive to see this project extend through the Trestle Bridge and connect the Chester Valley trail system to Downingtown. A new trail with some type of safety fence around it across the old bridge would give hikers breathtaking views of Downingtown and the surrounding areas. The parks system has done an incredible job with the East Branch Brandywine park, which just happens to be below the Trestle Bridge. I would like to see the same care given to the bridge. 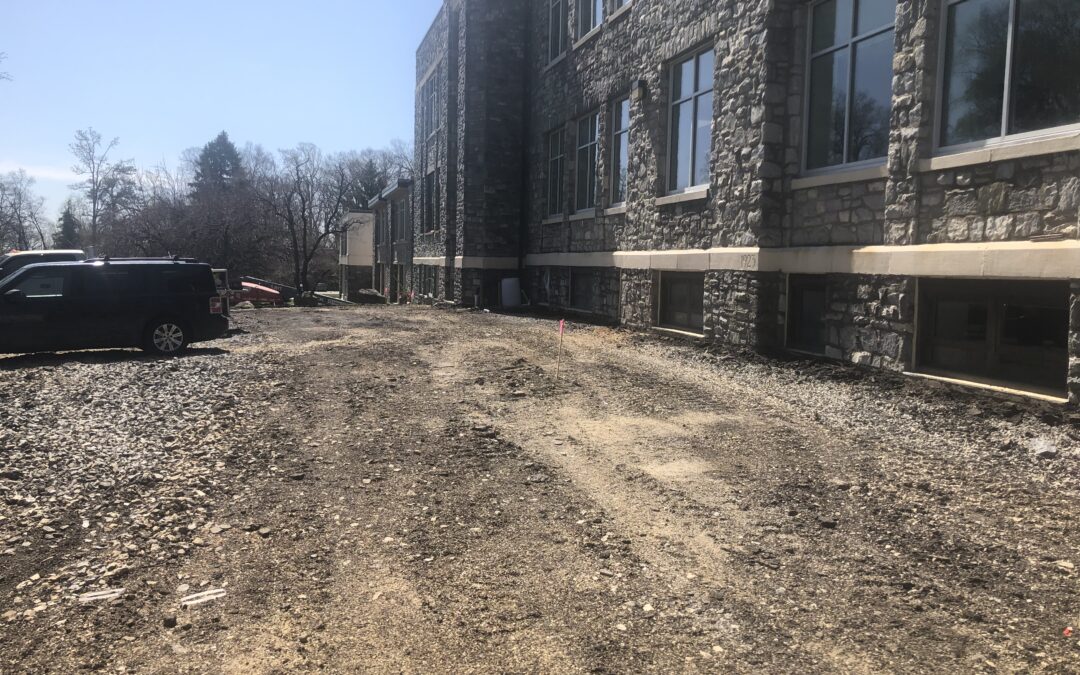 Out With The Old, In With The New

The new high-profile jobs are always cool, but sometimes it’s neat to see the old buildings renovated with parking improvements to make them ADA compatible. Howell Kline is glad to be a part of the 40 Lloyd Ave. project helping them make more room for parking and improving the sidewalks and ramps. We removed the old broken paving and sidewalk to make room for the new and improved and used the existing grades work to ensure we didn’t have to add any additional storm drainage. No job is too big or small for Howell Kline Surveying… give us a call! 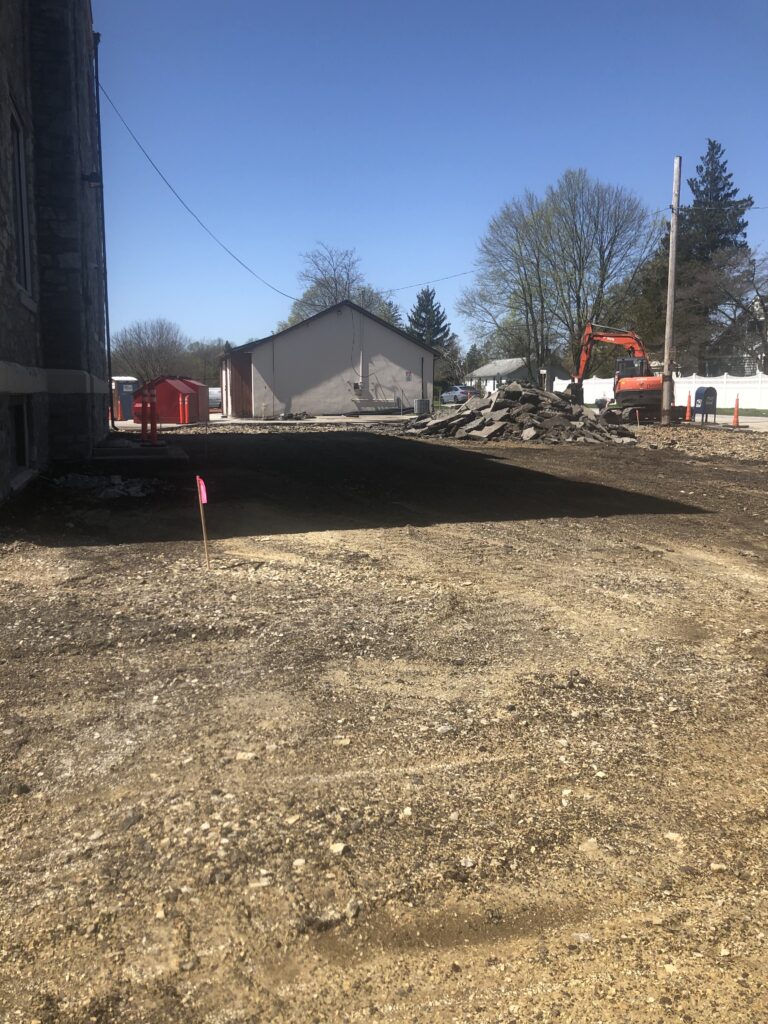